Thomas Hugh’s latest album ‘You the Crowd’ is a ‘moody dance’ through all of the emotions…the opening track Charlotte’s Going Down follows the life of a down-trodden girl unable to commit to anything…then taking you to the closing piece In Loch Sheldrake Under a Ramblin’ Moon turning the clock back to the times when kids were just kids…and nothing else mattered. Everything in between is a journey with incredibly beautiful ups and downs…taking on Let Me Down Easy made into a hit by Bettye LaVette (written by Wrecia Holloway)…making it very much his own.

You the Crowd was produced by Shannon Bourne (Russell Morris, Chris Wilson, Monique Brumby) and Benny Morgan (Geoff Achison) at Cross Modal Productions in Melbourne. It captures the hauntingly beautiful sounds Thomas has been putting out for the last 10 years… “working with Shannon on this has been incredible…what he’s able to pull out on guitar is nothing short of amazing…Benny is one of the best engineers I’ve ever worked with…it all seemed too easy…just amazing experience!!”, says Thomas.

Plenty of talent appears on the album with Shannon Bourne on guitars/organ, Garrett Costigan on pedal steel and Danny Mckenna on percussion. The end result is a sparse and beautiful collection. “A complete piece that should be taken in from beginning to end…they all go together”, says Shannon.

Thomas said, “I’m really looking forward to playing these new songs live…it’s a real journey that I feel very proud of. I hope people will join me…it’s a nice ride.” The album will be launched this year at the Port Fairy Folk Festival and it won’t disappoint.

Thomas and Shannon bring a desert folk vibe to Thomas’ rootsy songs of life…harking back to Thomas’ days growing up in Austin, TX to the dusty roads out west in LA to living permanently in Melbourne – when the two get together a journey begins and travels like a very long road…
This follows Thomas’ most recent EP, Sum =, a combustion of new-folk and indie pop, with old time storytelling and the occasional grand flourish thrown in for good measure.

Thomas has relased three albums Always Going Somewhere, Welcome to Yikesville and Strange Company, over the last six years but says, “I had the most amazing time recording You the Crowd.  I wanted  to really strip it back.  I wanted the songs to sound as if you were in your lounge room with a nice glass of red being taken for a long ride. 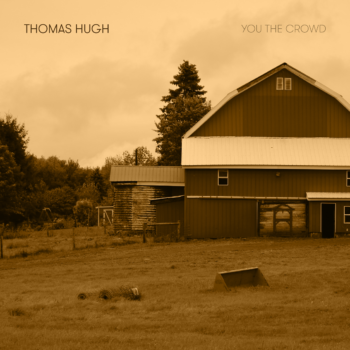